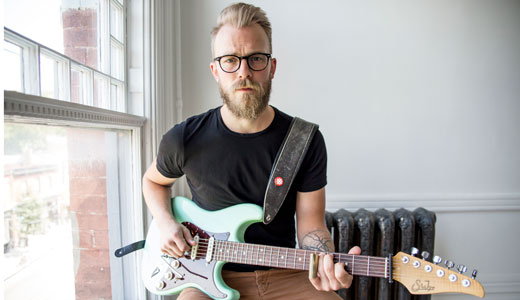 Joey Landreth’s music has taken him around the world many times. His break-out project as one half of JUNO Award winning roots-rockers The Bros. Landreth, took a short break after their acclaimed album Let It Lie kept them on the road for 4 years. The time-off afforded Joey the opportunity to tackle new creative challenge, and in 2017, he released his debut solo album Whiskey. Whiskey was an extension of The Bros. Landreth’s brand of eclectic, lush, and deeply meaningful songs, but accentuated and amplified by Joey Landreth’s dynamic guitar stylings. Guitar stylings that have been celebrated by the likes of Premiere Guitar, That Pedal Show, and Guitarist Magazine. The album and subsequent touring earned rave reviews from critics and fans, showcasing Joey Landreth as a songwriter, vocalist, musician, and performer in his own right.

For his latest creative pursuit, Joey teamed up with rising star and talented multi- instrumentalist, Roman Clarke. “His sensibilities are so different than my own. He has taken me places I would not normally go. Hindsight is a collection of songs that represent what it sounds like to mash Roman Clarke’s musical brain with mine”, says Landreth. Recorded over the course of a year between Lincoln Country Social Club Studio in Toronto, and Stereobus Recording in Winnipeg, the music found on Hindsight is not a radical departure; it's simply a broadening of horizons and an exercise in personal and creative growth.

Sold Out
Add to Cart